“He is here: the bronze MLK statue 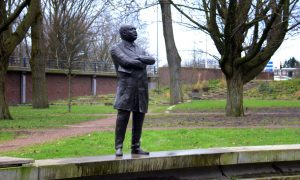 Without anyone knowing, this bronze 1.2 meter statue of Martin Luther King was created. It was placed in the Martin Luther King Park on January 15, 2020, the birthday of Dr. King. Hopefully the statue will be embraced by the municipality and all Amsterdammers, so he can stay permanently, in the park that was named after him to honor him, after his assassination in 1968.

As a result of the guerrilla pop-up exhibition Monument for Martin Luther King, the plan was launched to realize a bronze Martin Luther King Statue in the Martin Luther King Park. A poll in the local newspaper showed that local residents and users of the park were enthusiastic about a large statue in the park. With the parties involved, a suitable location for the statue was chosen and it would be presented to the local people during a information meeting in the park with tea and hot chocolate. But the progress of the project slowed down more and more, until nothing happened any more.

Statue placed in the spirit of Martin Luther King

In the meantime a sense of urgency grew, because equal rights and solidarity are more and more under pressure. Students with a non-Dutch name don’t get an interschip, women with a headscarf can’t find a job, children with a foreign background get a structural lower school advice. The burqa ban, racist slogans during soccer games, the ‘black pete’ blackface tradition that’s still not solved after decades of discussion…. That’s why the statue had to be realized now. It is a peaceful protest, a statement against racism and discrimination, dedicated to everybody who fights for equal rights. And an appeal to all the citizens of Amsterdam to stand up against injustice. The back of statue has a quote of Dr. King:

“The ultimate tragedy is not the oppression and cruelty by the bad people,
but the silence over that by the good people”. 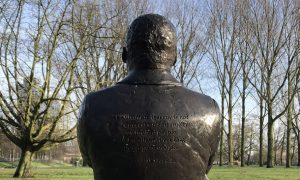 In 2018, 50 years after his assassination, the project Monument for Martin Luther King was developed: 50 identical statues of Martin Luther King. To keep his Dream alive, 50 identical statues were placed from Memphis to Amsterdam on locations that refer to slavery and places that emphasize the importance to end racism and fight for equality, regardless of gender, religion and race. To keep his dream alive, see mlk50.nl/50statues. One of these statues was placed in the Martin Luther King Park and put on a beautiful high ‘City Wood’ pedestal. That’s how the idea came about to create a permanent bronze statue. Because it should have been there already for years, in the park that was named after him. And now he is finally here; a gift for the Martin Luther King Park, a present for Amsterdam.

but whatever you do you have to keep moving forward.”